PokerStars have finally gotten rid of their much hated PokerStars Stars Rewards chest program, and replaced it with a rakeback program. This program promises:

If you don't want to read through the details, you can jump ahead to our verdict. Or, if you're just looking to sign-up for PokerStars, you can do so by clicking the link below:

You have 28 days to earn chests on PokerStars. If you earn the number of chests listed in the "# to Advance" column within that 28-day period, you will be moved up to the next highest chest tier (e.g. from Blue to Bronze). If you have points left over at the end of the window, you can exchange them for the next lowest value chest (even if you do not have enough points to earn that chest normally).

This gives you a total of $7.50 in rewards, which is 15% rakeback. Now you are a Bronze tier player, so in the next 28-day window, you would receive:

That's a total of $9 in rewards, which is 18% rakeback and is actually higher than the amount listed for either Bronze or Silver players! Don't get used to this though - this is an anomally. You are now a Silver tier player, so in the next 28-day window, you would receive:

This gives you a total of just $6.50 in rewards, which is only 13% rakeback...less than you received in the two previous 28-day windows! However, since you are now Silver tier, you can also participate in PokerStars Monthly Challenges. 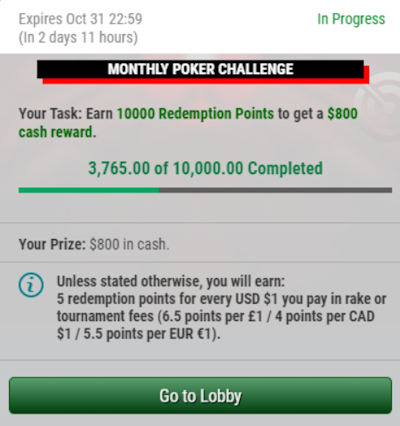 Players who reach Silver tier or higher can participate in monthly challenges. PokerStars claim these offer "up to 40% additional rewards", but they actually offer either 10% or 40% (but it's virtually impossible to achieve these every month, so 0% will be your most common reward). Despite their claims of transparency, it's not entirely clear what triggers whether you get a 10% or a 40% challenge. It would seem that winning players are typically offered the 10% challenge (although PokerStars claim this is only the case for 6.5% of the player base).

The monthly challenges are an "all or nothing" reward. You will be given a target number of reward points you must earn in order to receive a cash reward. You earn 5 redemption points for every $1 you pay in rake and tournament fees. If you achieve 99% of the required number of reward points, you get nothing. You can however get the reward twice. Although, your target is typically set anywhere between 1.2 to 1.5 times your normal volume, so even though PokerStars imply that this is a monthly reward, it's basically impossible to collect it every month unless you are steadily increasing your volume of play by 20-50% each month. To put that in perspective, if you started off generating $10/month in rake and completed your monthly challenge every month, by the end of the year, you would have to generate $75/month in rake (a 650% increase in volume), and that's assuming just a 20% increase in your target each month. But it's unclear over what time period PokerStars assesses and adjusts your volume of play. So much for transparency!

If you are a winning player (either consistently, or just for the previous month), then things are much worse than just getting 1/4 of the normal rakeback from your Monthly Challenge. Not only is your reward much less, but it's often much harder to achieve. Players who were receiving the 2,500 points ($500 in rake) for $200 (40%) monthly challenge frequently have their next month's challenge bumped to 3,750 points ($750 rake) for $75 (10%). That's a 50% volume increase for 1/4 the rakeback!

It's unclear why PokerStars would adopt such an annoyingly difficult system. They are probably trying to encourage players to constantly increase their volume even though that's obviously not sustainable. It would appear that the best way to earn rakeback at PokerStars is to play at least half of your volume on another site, and just play enough to maintain Silver tier with PokerStars ($28.50 in rake each month). If you are offered an achievalbe 40% Monthly Challenge, you can then play primarily on PokerStars. When you consider that the purpose of a rewards program is to encourage you to play on their site, it seems monumentally stupid to create a system that encourages you to play at least half of your poker elsewhere!

Since you achieved Silver tier in your second month, you would have been given a Monthly Challenge in your third month. However, since you've been consistently raking $50/month up to this point, your Monthly Challenge will likely be something like $24 for 300 redemption points. This would require $60 in rake (20% more than your normal volume). Let's assume you were lucky enough to get a 40% Monthly Challenge, and raked a total of $65 the next month (6,500 reward points, and 130 redemption points). You would receive:

This is a total of $35.50 in rewards from $65 in rake, for a whopping 54.6% rakeback! This is great...but it's not sustainable! In the next month, your Monthly Challenge reward target would likely increase again!

However, if you've been winning, your Monthly Challenge would more likely be something like $7.50 for 375 redemption points ($75 in rake, for a 50% volume increase). Since you're unlikely to put in 50% more volume for an additional 10% rakeback, you'd be back to earning just 13.5% rakeback from the PokerStars Stars Rewards chests.

Despite their claims of increased transparency, it is actually much harder to calculate your rakeback with the new PokerStars Stars Rewards rakeback program! This is because it is unclear:

Since the objective of this website is to calculate your "net cost" to play on various poker sites, we have been forced to make the following assumptions for playing on PokerStars:

As we can see from the table to the right, the new Stars Rewards rakeback program is significantly better for all players except low volume Net Depositors. But of course, PokerStars isn't competing against PokerStars. There are plenty of other online poker sites for you to choose from, so how does the revamped PokerStars Stars Reward program compare to those?

Other online poker sites do not separate players into the exact same tiers. However, we have completed detailed analyses on the rewards programs for multiple sites which allows us to make an apples to apples comparison (by comparing rewards for similar volume of play). For the sake of comparison, we will use PokerStars' tiers, but for the other sites will present the average rakeback rewards across a variety of volumes within that tier. We will highlight in green any rewards programs that significantly out-perform the PokerStars rakeback program. You can click the site name to see that site's full review.

The majority of poker players do not make a profit playing the game. With the exception of Silver tier players, these players are better served playing online at either Americas Cardroom or GG Poker.

If you only play poker, then we recommend you join Americas Cardroom. Although the Winning Poker Network doesn't have nearly as much volume of play as PokerStars, they are still one of the biggest networks. Unless you plan to play 10+ tables simultaneously, Americas Cardroom has more than enough tables to choose from, and plenty of tournaments.

If you want a poker site with traffic comparable to PokerStars, are a high volume player, or also enjoy playing online casino games, then you should instead download GG Poker. Americas Cardroom also have an online casino, but it's terrible (limited game selection and no rewards).

For winning poker players, the best option by far is Americas Cardroom, who offer significantly better rewards for all volumes of play. Although PokerStars aren't shafing you nearly as hard with the revamped Stars Rewards program, they're still shafting you! You can download Americas Cardroom by clicking the banner below:

If you also enjoy playing casino games or betting on sports, then we strongly recommend that you also download DitoBet. Although not nearly as good for online poker in terms of traffic and promotions, DitoBet are much better than Americas Cardroom for sportsbetting and casino games, with far more games and betting options, and much better promotions. You can download DitoBet by clicking the banner below:

The new PokerStars Stars Rewards rakeback program is a huge improvement on the previous Stars Rewards chests! Although the rewards are still lower than several of their competitors, the new PokerStars rakeback rewards make the site a viable option for everyone. If you are more concerned with playing on the biggest name in online poker than in maximizing your rewards (or are a Silver tier player and lose more than you win), you can download PokerStars today by clicking the download button below:

However, if you want even better rakeback rewards and are not a consistent winner, or also enjoy playing casino games, then it is better for you to download GG Poker instead by clicking on the banner below:

If you consistently win at poker, aren't looking to grind 10+ tables, and want better rakeback rewards than those offered by PokerStars, you should download Americas Cardroom. Although they don't have nearly as much traffic as either PokerStars or GG Poker, the Winning Poker Network are a major network with more than enough traffic to satisfy most online poker players' needs. You can download Americas Cardroom by clicking the download button below:

However, if you also enjoy playing online casino games, or betting on Sports, then you should also download DitoBet. Not only does DitoBet offer a much wider variety of casino games and sports betting options than Americas Cardroom, but they also offer far better promotions. DitoBet also have a poker site that is very soft, but their poker site doesn't offer any rewards and has very low traffic compared to the sites above. You can download DitoBet by clicking on the banner below: